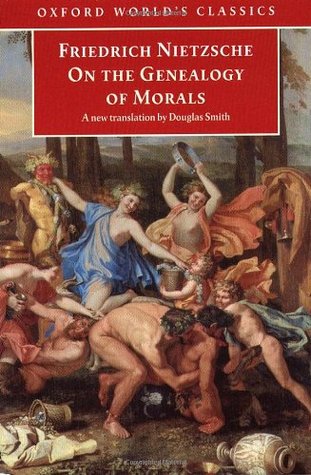 I was reading “On the Genealogy of morals” by Friedrich Nietzsche. It is a very dense book to absorb and I felt like I need to read it again and again and also read some explanations by others. I found a good review on goodreads that I am feeling to post here just to keep track. Thanks to Rowland Bismark’s Reviews.

On The Genealogy of Morals is made up of three essays, all of which question and critique the value of our moral judgments based on a genealogical method whereby Nietzsche examines the origins and meanings of our different moral concepts.

The first essay, “‘Good and Evil,’ ‘Good and Bad‘” contrasts what Nietzsche calls “master morality” and “slave morality.” Master morality was developed by the strong, healthy, and free, who saw their own happiness as good and named it thus. By contrast, they saw those who were weak, unhealthy, and enslaved as “bad,” since their weakness was undesirable. By contrast, the slaves, feeling oppressed by these wealthy and happy masters, called the masters “evil,” and called themselves “good” by contrast.

The second essay, “‘Guilt,’ ‘Bad Conscience,’ and the like” deals with (surprise, surprise) guilt, bad conscience, and the like. Nietzsche traces the origins of concepts such as guilt and punishment, showing that originally they were not based on any sense of moral transgression. Rather, guilt simply meant that a debt was owed and punishment was simply a form of securing repayment. Only with the rise of slave morality did these moral concepts gain their present meanings. Nietzsche identifies bad conscience as our tendency to see ourselves as sinners and locates its origins in the need that came with the development of society to inhibit our animal instincts for aggression and cruelty and to turn them inward upon ourselves.

The third essay, “What is the meaning of ascetic ideals?” confronts asceticism, the powerful and paradoxical force that dominates contemporary life. Nietzsche sees it as the expression of a weak, sick will. Unable to cope with its struggle against itself, the sick will sees its animal instincts, its earthly nature, as vile, sinful, and horrible. Unable to free itself from these instincts, it attempts to subdue and tame itself as much as possible. Nietzsche concludes that “man would rather will nothingness than not will.”

Nietzsche is difficult to read because he demands that we overturn or suspend many of the assumptions that our very reasoning relies upon. He is one of the Western tradition’s deepest thinkers precisely because he calls so much into question. If we can come to understand Nietzsche’s genealogical method, his doctrine of the will to power, and his perspectivism as all linked, his arguments will become much easier to follow.

In Nietzsche’s distinction between a thing and its meaning, we find the initial doubt with which Nietzsche unravels so many of our assumptions. We are generally tempted to see things as having inherent meanings. For instance, punishment is at once the act of punishing and the reason behind the punishment. However, Nietzsche argues, these things have had different meanings at different times. For instance, the act of punishment has been at times a celebration of one’s power, at times an act of cruelty, at times a simple tit-for-tat. We cannot understand a thing, and we certainly cannot understand its origin, if we assume that it has always held the same meaning.

Central to Nietzsche’s critique, then, is an attempt at genealogy that will show the winding and undirected route our different moral concepts have taken to arrive in their present shape. Morality is generally treated as sacred because we assume that there is some transcendental ground for our morals, be it God, reason, tradition, or something else. Yet contrary to our assumption that “good,” “bad,” or “evil” have always had the same meanings, Nietzsche’s genealogical method shows how these terms have evolved, shattering any illusion as to the continuity or absolute truth of our present moral concepts.

Because they can have different, even contradictory, meanings over the course of their long life spans, Nietzsche does not believe that concepts or things are the fundamental stuff that makes up reality. Instead, he looks beneath these things to see what drives the different meanings that they adopt over time. Hiding beneath he finds force and will. All of existence, Nietzsche asserts, is a struggle between different wills for the feeling of power. This “will to power” is most evident on a human level, where we see people constantly competing with one another, often for no other purpose than to feel superior to those that they overcome.

That a thing has a meaning at all means that there is some will dominating it, bending it toward a certain interpretation. That a thing may have different meanings over time suggests that different wills have come to dominate it. For instance, the concept of “good” was once dominated by the will of healthy, strong barbarians, and had the opposite meaning that it does now that it is dominated by the will of weak, “sick” ascetics.

According to Nietzsche, then, a belief in an absolute truth or an absolute anything is to give in to one particular meaning, one particular interpretation of a thing. It is essentially to allow oneself to be dominated by a particular will. A will that wishes to remain free will shun absolutes of all kinds and try to look at a matter from as many different perspectives as possible in order to gain its own. This doctrine that has deeply influenced postmodern thought is called “perspectivism.”

Nietzsche’s inquiries are thus conducted in a very irreverent spirit. Nothing is sacred, nothing is absolute, nothing, we might even say, is true. Our morality is not a set of duties passed down from God but an arbitrary code that has evolved as randomly as the human species itself. The only constant is that we, and everything else, are constantly striving for more power, and the only constant virtue is a will that is powerful, and free from bad conscience, hatred, and ressentiment.

Nietzsche’s main project in the Genealogy is to question the value of our morality. Ultimately, he argues that our present morality is born out of a resentment and hatred that was felt toward anything that was powerful, strong, or healthy. As such, he sees our present morality as harmful to the future health and prosperity of our species. While the “blonde beasts” and barbarians of primitive master morality are animalistic brutes, at least they are strong and healthy. On the other hand, our present ascetic morality has “deepened” us by turning our aggressive instincts inward and seeing ourselves as a new wilderness to struggle against. Nietzsche’s ideal is to maintain this depth and yet not be ashamed of our animal instincts or of the life that glows within us.